Before we moved to Astoria I read numerous message boards about living in New York City, raising kids in NYC, and Astoria in general.  On the Astorians.com message board I read many, many rave reviews and reports of the "Taco Truck".

A truck that sells tacos out of the side of it.  If you've been to NYC, you'll have an idea of what it looks like.  Street meat is a normal choice of goods around here.

At one point this summer the said Taco Truck disappeared off the streets sending hundreds of Astorians into a panic - and even causing a local food blogger to blog about "Taco Truck Alternatives".  It turns out the owners permit for selling food on the street had expired and had to renew it - they were not gone forever, much to the relief of the local community.

I knew this type of eatery would be right up Joe's alley (and mine!), so I told him all about it and we even had Henry talking about the Taco Truck before we moved here.  We were ready to experience the goods!

However, no matter how much we spoke about it - we never made it down to the area during the evening to dine at the curbside eatery.  Months passed by and we had yet to try it.

One glorious night I was on my run and I passed by a new food truck right off our street, just a few blocks down....it sure smelled good...oh - and wait!  What is that I see?  "El Ray Del Taco #2" graced the front of the truck in red, white and green lettering.

This was not just any Taco Truck, it was THE TACO TRUCK!

That same night I logged onto Astorians.com and quickly read about the "#2" truck opened by the family being parked right here on Ditmars.

Joe and I rejoiced.

Tonight we finally had the chance to dine at the lovely Taco Truck.

2 beef tacos.
1 cheese quesadilla.
1 chicken burrito.
1 chicken huarache.
and $21 later we were stuffed, with huge smiles on our faces.  I get it now - I understand the outrage and concern when the Taco Truck disappeared.  This is a gem!  Sooooooooooo good.  Like, I'm-gonna-crave-it-every-single-day good!

Directly after our meal Henry started to sing, "Taco Truck, Taco Truck!" while dancing around the house.  He and Joe were playing Legos and before I knew it... 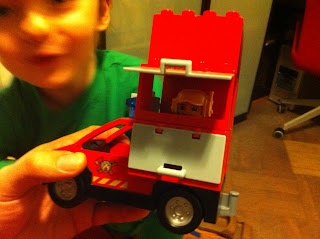 They built a Taco Truck.
How many kids play Taco Truck?!?!
:)