While I encourage all guests to Walt Disney World to review ride descriptions and make their own choices on rides they are attracted to, I also have found it useful myself to read reviews and opinions before riding. Below, please find the current Epcot ride and attraction offerings - you will see Disney's take on it, followed by some brief thoughts from me. The attractions with a smiley face next to them are toddler-friendly.

If you have any questions, please do not hesitate to leave a comment or contact me at brook@mouseworldtravel.com! 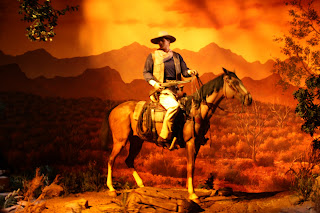 Go behind the silver screen to witness great movie moments captured in time with thrilling film clips and lifelike Audio-Animatronics® figures. Board a vehicle to ride through unforgettable scenes featuring legends of motion picture history.
--Brook’s Notes: A bit dated looking and feeling, but still enjoyable.  Great movie clips at the end.  The “Alien” scene in the ride is a bit scary, you can distract little ones, but it takes some effort. 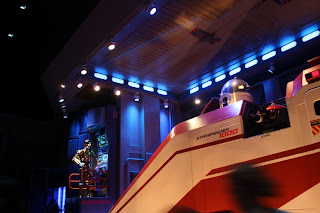 ☺Star Tours
While visiting that "galaxy far, far away," experience a new story, plus a chance to fly with some favorite characters like C-3PO, R2-D2, Princess Leia and even Darth Vader! You'll never know which of these classic characters will appear during this flight to the furthest reaches of the universe.
Plus, travel the galaxy like never before in the all-new Starspeeder 1000!
You never know where the Force might take you. Many different Star Tours adventures await you-including multiple storylines and locations. Riding once is not enough!
Height Requirement: 40" (102 cm) or taller
This attraction has FASTPASS
--Brook’s Notes: Fantastic ride, really a lot of fun!  If you get motion sick easily, or are claustrophobic, you might want to pass on this one.  If your child reaches the hight requirement, chances are they will love it!

☺Indiana Jones Epic Stunt Spectacular
Thrill to the pulse-pounding explosions, crashes, clashes and death-defying stunts of Indiana Jones' onscreen adventures. Sit behind the director's chair to participate in this stage spectacular that reveals some of the moviemaking magic responsible for Indy's triumphs over deadly traps, bad-guy battles and epic-scale obstacles. You may even be chosen to be an extra!
This attraction has FASTPASS
--Brook’s Notes: Fastpass is only open during the very busy seasons.  About 30 minutes long, very enjoyable and impressive. 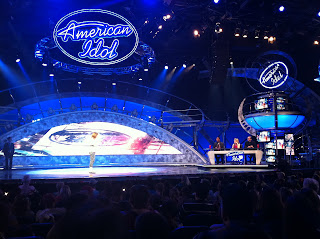 If you've ever dreamed of becoming part of the "American Idol" phenomenon, then welcome to Disney's Hollywood Studios™! Because now you can live the dream during The American Idol Experience*. This exhilarating, new attraction features the glitz and glamour of the hit television series' stunning set, and will give Guests an opportunity to experience the thrill as if really at the show.
--Brook’s Notes: Coming from a non-AI watcher, this show at Hollywood Studios is really fun!  Real park guests showing off their talent.  Very entertaining.  Comfortable theater seats, air conditioned.

Sunset Boulevard
Tower of Terror
Brave the creepy facade of a once-glorious hotel for a jolt back in time. Board a phantom elevator, shoot up 13 stories and brace yourself for a thrilling plummet... but beware! The experience just got scarier. You rocket back up, only to plummet down yet again. You dare to ride once more, but wait! That's not what happened before. That's right, now the Tower is in control, so it's never the same fear twice!
Height Requirement: 40" (122 cm) or taller
This attraction has FASTPASS
--Brook’s Notes: Spooky at the beginning, but so FUN!!  A favorite.  The line moves pretty quickly, so don’t worry if it seems long. 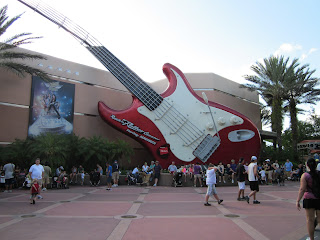 Aerosmith's having a backstage party across town and you're invited. Ready to brave the LA freeways? Zoom from 0-60 mph with the force of a supersonic F-14, take in high-speed loops and turns synchronized to a specially recorded Aerosmith soundtrack and zip through Tinseltown in the biggest, loudest limo you've ever seen.
Height Requirement: 48" (122 cm) or taller
This attraction has FASTPASS
--Brook’s Notes: A very quick roller coaster - meaning fast and short!  Very fun though, all completely enclosed and dark.

Animation Courtyard
☺Disney Junior - Live on Stage
A whole cast of friends from Disney Junior fill the stage. Sing, dance and play along with this new live stage show featuring friends from Mickey Mouse Clubhouse, Handy Manny, Little Einsteins and Jake and the Neverland Pirates!
--Brook’s Notes: Adorable, adorable, adorable!  There are NO seats aside from a few benches in the back right-hand corner.

☺Voyage of the Little Mermaid
Journey into the magical world of dancing fish, calypso-ing crabs and curious merfolk in this thrilling theatrical experience. Join Ariel for an exciting voyage from the ocean floor up to where humans live. It's an undersea party of live performers, colorful puppets, special effects, film clips and enchanting music with Flounder, King Triton, Sebastian and others.
This attraction has FASTPASS
--Brook’s Notes: Such a FUN show!  Love this one.  Impressive.

The Magic of Disney Animation 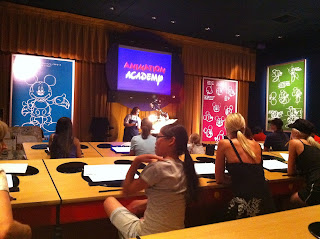 Go on a magical exploration of the enchanted world of Disney animation. Learn the basics of animation in an amusing short live-action film and see how animated characters are made, explore the animation process in fun interactive exhibits, and get a hands-on opportunity to create your very own Disney Character sketch.
--Brook’s Notes:  The tour is interesting, but learning to draw a Disney character is the best part!  The instructor usually goes slow enough for older kids to keep up.  You get to take your sketch home.  And if you want it, don’t be shy to ask for the instructors drawing, they usually give them away!

Streets of America
☺Muppet*Vision 3-D
Join the fun as your favorite fuzzy pals take you on a hilariously wacky 3-D tour of Muppet Labs. Find yourself in the center of a cinematic spectacular of song, dance, surprise appearances, Audio-Animatronics® characters and non-stop shenanigans that literally bring the house down around you. It's must-see 3-D!
--Brook’s Notes: Jim Henson’s last work before his death.  It does show age, but is still very entertaining!

☺Honey, I Shrunk the Kids Movie Set Adventure
No need to be zapped by Professor Szalinski's Electromagnetic Shrinking machine to get a taste of what fun life can be from a bug's perspective! Climb, crawl and explore in this larger-than-life interactive playground where anthills are mountains, LEGO® bricks are hiding places and blades of grass tower like trees.
--Brook’s Notes: This is one AWESOME playground!  It’s very HOTTTTT in there, so be prepared.  It also has a lot of tunnels, so losing sight your child for a minute or two can happen, it’s best to have at least 1 adult per kid in here, or older children to help guide the younger set.

☺Lights, Motors, Action! Extreme Stunt Show
Get ready for extreme thrills at this full-throttle, high-octane live stunt spectacular. Engines rev, tires screech and adrenaline kicks into overdrive as a series of highly orchestrated stunts, specially designed cars, motorcycles and jet skis and amazing pyrotechnics give you a behind-the-scenes look at how action stunts are created for the movies.
This attraction has FASTPASS
--Brook’s Notes: Fastpass is only available during the busy seasons.  High-energy and lots of fire!  A little boys dream come true!  Lightening McQueen is now featured within the show. 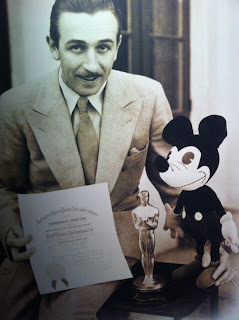 Mickey Avenue - Pixar Place
Walt Disney: One Man’s Dream
Take a multi-sensory adventure across the eras that shaped the man whose life accomplishments still intrigue and inspire people the world over. Specially created to commemorate the 100th anniversary of Walt Disney's birth, this gallery exhibit offers a trip through time, complete with audio interviews, archival footage, inventions and innovations of the visionary whose name is synonymous with magic.
--Brook’s Notes: This is basically a museum of the amazing work Walt Disney did, very interesting, educational and inspiring.  Be sure to watch the film.  Children may get bored.

☺Toy Story Midway Mania
Take aim and ride an interactive 4-D "Toy Story" adventure. It's Toy Story Mania!—a brand-new attraction inspired by Disney•Pixar’s "Toy Stor" films. So come grab some 3-D glasses before boarding your ride vehicle and zipping off into a world of immersive, midway-style games hosted by favorite characters like Woody, Buzz, Rex and Hamm! Use your spring-action shooter to launch virtual darts at balloons, rings at aliens, eggs at barnyard targets and beyond. See who can rack up the most points. (Psssst. Certain targets trigger fun surprises!) On your final stop, the scores are tallied and the highest for the day are displayed. Will yours make the cut?
This attraction has FASTPASS
--Brook’s Notes: EXTREMELY popular.  Be sure to get on this ride first thing after the park opens and/or grab a Fastpass!  The Fastpasses disappear QUICKLY.  Very fun, but man, your arm gets sore!

☺Disney’s Hollywood Studios Backlot Tour
Brace yourself for an all-out special effects encounter with a water tank in "Harbor Attack," then board a guided tram ride for a look at life-like façades used in exterior shots from familiar television shows and movies. Wind past soundstages, peek inside the Disney's Hollywood Studios® camera, props and lighting departments, face nature's fury during an exhilarating detour through Catastrophe Canyon and more!
--Brook’s Notes: The previous Backlot Tour, when the park was an actual working studio, was very in-depth, this is much more simple, but still enjoyable.  The Harbor Attack and Catastrophe Canyon scenes are very fun.

Contact me at brook@mouseworldtravel.com and I'd be thrilled to discuss the variety of options that Disney offers to make a memorable trip of your own. From Disney World, to Disneyland, to cruises and overseas - there are options that fit every person, every vacation style, and every budget!